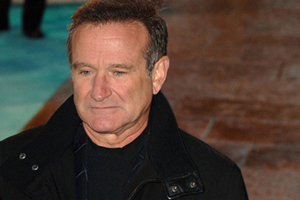 We were just as shocked as everyone else to hear of the death of Robin Williams. The comments we heard included that he was in a better place, that his pain was gone now, that his decision to end his suffering was brave. All I felt was sadness. There are times that I envy those with depression. I have Schizophrenia. There are so many more treatments available to combat depression than we have to fight schizophrenia. My medications carry some really scary side effects as well. There have been times in my life that I’ve felt like giving up on the fight. Thankfully, I have never thrown in the towel. Mental illness runs in my family. I’ve lost relatives to suicide. I know what Mr. Williams’ family is going through right now. At least we got to grieve for our loss privately rather than in the glare of massive public interest.

What really scares me when this kind of thing happens is that when people start believing that suicide is understandable for those with serious mental illnesses, that they are out of pain and in a better place, then we might be walking towards the day where euthanasia for those with mental illnesses is accepted as normal. I am mindful that some of the first people to go to the gas in Nazi Germany were those with schizophrenia. I would have been at the front of the line. The really ironic thing is that the area where Nazi eugenicists experimented has the same percentage of the population with schizophrenia today as the rest of the world. Their euthanasia program didn’t rid their future society of this scary illness. The human brain is just too complicated to be contained that way.

My faith tells me that as long as there is life, there is hope. Every human has equal dignity and humanity. Yet, why do we ostracize and segregate the mentally ill?  We are no longer institutionalized, but for me, and my friends with mental illnesses, we don’t really feel like a part of mainstream society. There are times that I feel like people think I’m a monster because of my illness. I can see fear in people’s eyes. Still, I’m one of the lucky ones. I was born in a time and place where there is a treatment for my illness, if not yet a cure. The medication that has given me my life back has allowed me to pass as “normal.”  Half of people with this illness can’t even with the medications. I could hide and not be as public about my illness, but that would just reinforce the stigma I fight so hard against.

Sometimes when my wife and I give speeches to groups of nurses, we realize that it might be the only time that the audience has ever talked to someone who has schizophrenia who isn’t in crisis. The question we always get asked is how to keep people on their medications. For me, it was important to have a reason to stay on my medicine. When a person is psychotic, they really don’t care about where they are or what they are doing. In that state they might think they are one of King Arthur’s knights or ruler of the world. When they re-enter reality, they are someone people fear, living on a small disability income, usually in a bad or scary part of town. Who wouldn’t prefer psychosis.

We have to have a purpose. We need a reason to want to get up in the morning and stay on our medication. For me, that was volunteering. For some, it might be something as simple as taking care of a pet. The most important thing is relationships. When you have this illness, you can’t read body language properly. You don’t understand nuance or hidden agenda. It makes having relationships very difficult, but at the same time, they are as crucial for us as for any other human. For this reason, I helped found the Prosper Place Clubhouse in Edmonton. It is a place for those with serious mental illnesses to meet and make friends. For 15+ years, those were my only real friends. When I got married, my wife said it was like she had become a frat house mom to a bunch of my unmarried friends. She’s a big reason for me to stay on my meds now. Only 10% of people with schizophrenia are married, so I’m a lucky guy.

Austin Mardon was a respected young scientist when he developed schizophrenia. He dedicated the rest of his life to advocacy for the mentally ill, and was awarded the Order of Canada in 2007 for his advocacy. The story of his incredible life can be discovered in Tea With the Mad Hatter.

Catherine Mardon was an attorney in the United States when she was attacked by a white supremacist angered that she testified against their leader. The resulting injuries ended her career and put her in a wheelchair for 8 years. The story of her fight to reclaim her life can be found at Curveballs.

Look for their upcoming articles in CLPNA’s CARE magazine.

One response to “Robin Williams and the stigma of mental illness”