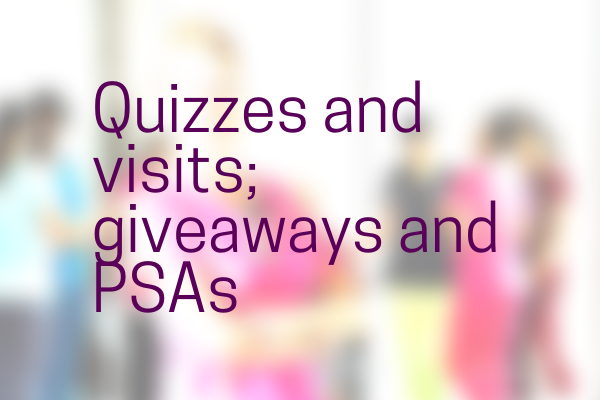 During National Nursing Week, the College of Licensed Practical Nurses of Alberta helped LPNs celebrate by running a contest for fantastic swag, partnered with a Calgary radio station, and broadcast public service announcements on CTV.

Clever LPNs across the province were tested by the #RegulatorySmarts Quiz which resulted in 200 prize packages being awarded to selected participants. Congratulations to all that won a prize!

Visits by Wild 95.3 with CLPNA swag

Thanks to Calgary Radio Station Wild 95.3 for partnering with the CLPNA during National Nursing Week. Bo and Jess from Wild 95.3 visited nursing units at local hospitals to drop off some goodies and show their gratitude for all they do. Visits were made to many units including Peter Lougheed Centre, the NICU at the Alberta Children’s Hospital, the gynecology crew at the Tom Baker Cancer Centre, the Foothills Hospital, and the Calgary & Area Child Advocacy Centre. As a former LPN, Jess has special appreciation for LPNs and their commitment to caring for their patients.

Wild 95.3 and Kool FM broadcasted commercials featuring Alberta LPNs as a part of the CLPNA’s public awareness campaign throughout the week.

Broadcasts on CFWE Radio helped raise awareness about National Nursing week and the vital role that LPNs play in healthcare teams across Alberta. CFWE broadcasts to over 85 communities across Alberta, and are the only broadcast link to the Aboriginal market in Alberta.

And finally, as a part of this spring campaign, both video and visual advertisements were displayed on the CTV News Edmonton & Calgary websites as well as on the CTV News Go App.

The CLPNA will be running further public awareness campaigns again in the fall on CFWE radio, on CTV’s websites and the CTV News Go App, and Global Edmonton & Calgary, so keep an eye and an ear out online and on radio.