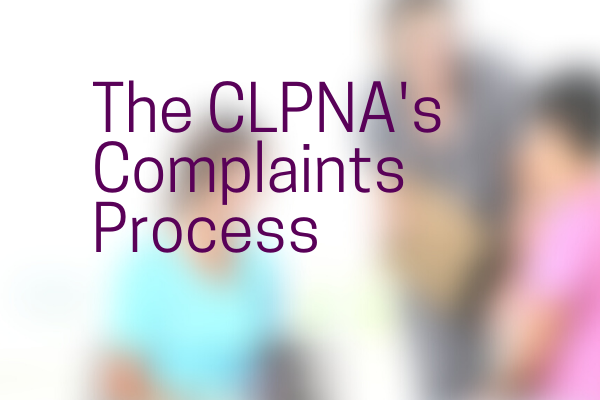 One of the primary responsibilities of the College of Licensed Practical Nurses of Alberta (CLPNA) is protecting the public from unethical, unskilled, and unsafe nursing practice. Legislation, Standards of Practice, Code of Ethics, and policies provide the framework that governs the Licensed Practical Nurse (LPN) profession, and therefore every LPN, in Alberta. Holding LPNs accountable to these standards is enforceable under the Health Professions Act (HPA). A breach may be considered unprofessional conduct and could result in disciplinary action. This is where the CLPNA’s complaint process begins.

Written complaints against LPNs submitted to the CLPNA are taken very seriously and are managed as outlined in s. 54 of the HPA. The complaint process can be complex and lengthy. The CLPNA ensures complaints are handled with procedural fairness and in a reasonable time frame.

Step One: Opening a Complaint

If warranted, the CLPNA may also take immediate action. This may include a condition or a suspension on the Investigated Member’s practice permit until disciplinary processes are concluded.

The CLPNA has the legal authority, under s. 63 of the HPA, to collect any information and relevant documents during an investigation. This may include personal information and medical documentation. The Complainant and/or Employer, the Investigated Member, and witnesses are interviewed by an appointed investigator.

To ensure public protection, the investigation’s scope may widen to include other conduct matters not presented in the initial complaint letter, but identified during the process.

The investigator does not make recommendations on complaint resolution.

Following the investigation, a written report is submitted to the Complaints Director who analyzes it to determine the best path to resolve the complaint in the interest of the public.

When determining the best resolution, patient safety, public interest, and the reputation of the profession are also taken into consideration.

There are several ways in which the Complaints Director can resolve a complaint:

Once a resolution has been chosen, sanctions or penalties may be required to address the unprofessional conduct. Sanctions can range from education or fines/costs, to suspension or cancellation.

RELATED – What is a Complaint?